Winterstone is ideal for larger sculptures.  It is applied like clay to a frame then carved into final shape while curing.

I invited the public to help apply the Winterstone clay layers to this sculpture and had the pleasure of 60 people helping.  "When this project started, it involved building a tribute to Robert Munsch. But, as I talked with the people building the princess, I realized we were building memories. When I saw the sparkle in their eyes as they smoothed the clay with their fingertips I realized we were also inspiring young artists.  Listening to the chatter of strangers as they worked together I discovered that we were also building community. Building the Paper Bag Princess was much more than building a sculpture, it was about building pride, memories, artists, and strengthening our community.” 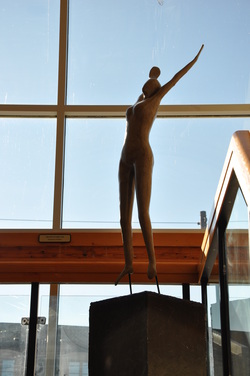 Celebration
(2.5 m high including base)

This is the script for Celebration's unveiling during the GYMC Gala.

"Ben McCarl is a sculptor who carves stones such as soapstone, alabaster and clay for display inside homes.  He decided to try his hand at carving a larger sculpture for public
display and chose to donate his first to GYMC."

"Why GYMC?  Many years ago at his daughter’s piano recital he fell in love with the architecture and mission of the GYMC.  Through conversations with Brenda Gibson, this focal location on the stairway was selected for the sculpture, a female form jumping up in
the air with hands above head in celebration.  This inspired the name for the new sculpture, Celebration."

"Natural stones this large are very heavy so he opted to try something new called Winterstone for this project.  It consists of a metal frame covered with foam which is carved into shape and covered with wire mesh then coated with tinted Winterstone and sealed.  You can see the progress and read about Ben’s thoughts, successes and
difficulties along the way by visiting the blog on his website www.benmccarl.com."

"He actually made a smaller version of Celebration first to test his plans and learn how to work with Winterstone.  She has joined the multitude of other sculptures adorning Ben’s home."

"Ben enjoyed creating this sculpture for public display so much that he intends to make many more.  Now that he has
experience with Winterstone, a host of ideas of varying complexity, size and  colour are brewing in his head.  We
at the GYMC are thrilled and honoured
that he chose us for the first in this series.