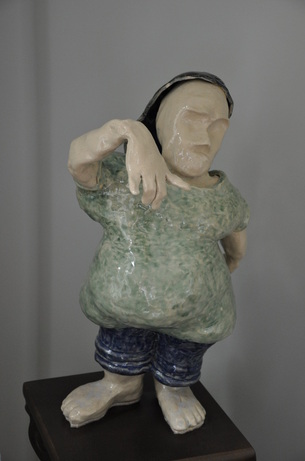 Roll out a strand of clay and lay it out in the shape of a footprint.  Roll another strand and squish it on top of the first.  Form the toes.  Continue up the foot, then the other foot, then the legs, the belly (the oh-so gorgeously plump belly), the shoulders, the arms, the hands then the head.  This sculpture was created in a hand form pottery class.  When I started, it felt like there was plenty of time so the toes and toenails are fine detail but as the weeks passed  by faster than the height increased, the pressure built and the details diminished.  By the time the last week rolled around, Dude was still headless.  A quick pinch pot with rough features was all that time permitted.  Perhaps some day art critics will debate the significance of diminishing details ("... the artist made the feet more detailed than face to symbolize that stepping through life is more important than watching it."), but we both know that it was the result of time pressure, not inspiration. 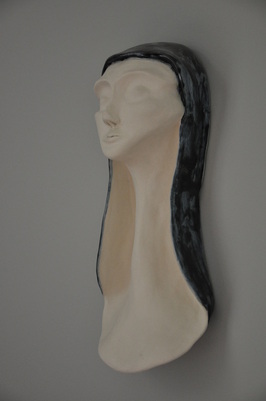 Wanting to experiment with unglazed portions on sculptures, letting the raw honesty of fired clay show through, I bought some white clay, hand formed this sculpture of a woman's head and glazed only the hair to contrast the white skin. 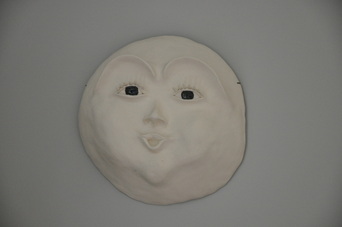 Many years ago, my daughter Ashley used to say a humorous verse, "Hi, my name is Chubby.  My father's chubby, my mother's chubby, my whole family's chubby...."  The memory inspired this round, happy face.  It is made from white clay and the only glazed parts are the irises in the eyes.  I'm most proud of the eyelashes, which are long, wispy and look incredible at night with our corner lamp casting long eyelash shadows around Chubby's eyes. 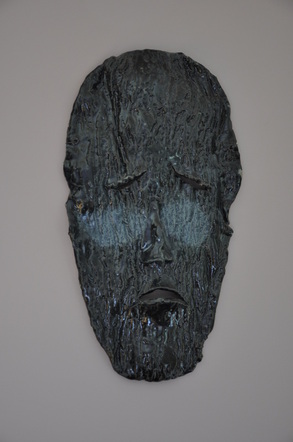 One night at a hand form pottery class, the instructor mentioned an inspiring way to get texture onto a creation.  I immediately kneaded and rolled out a large slab of clay on a board then opened the door and carried it outside. Finding a suitable big old tree with rough bark I tipped the board up and slammed the clay slab against the tree.  It stuck.  I pulled away the board then with my hands pounded the clay onto and into the bark.  Eager to see the result, I tried peeling the clay off but found it stuck far too well (lesson learned for future bark creations).  Persistent peeling at the edges of clay eventually freed the textured slab so that I could return it to the board and head back inside.

Contours were created by sneaking rolled up balls of paper under the clay.  Eyes, nose and mouth were formed.  The piece was actually taller than this at the start but a quick measurement of the maximum size than the kiln would hold forced me to shave some clay from the forehead and chin.

For glazing, the entire piece was coated with light blue then I tried to dip the entire sculpture in a dark blue overcoat but it wouldn't fit into the pail of glaze.  I resorted to dipping the top of the sculpture in the glaze solution then flipping the sculpture upside down and glazing the bottom part.  Two small circle spots didn't get covered.  Wow.  I stumbled across a way to highlight the cheeks.  Perfect. 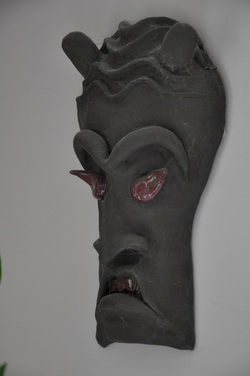 In an experiment with black clay, I decided to create an evil face.  Only the eyes and teeth are glazed red.  The emotion captured is dramatic and successful, drawing observers to step closer to study it, but usually with arms crossed in a defensive posture.  Then they look at me with hesitant eyes and question.  Beneath their questions lies a fear, wondering how and why I would create such a piece... wondering if there was an evil edge lurking within me that they hadn't previously observed.

Answer: There is an element of evil temptation within us all.  In some of us it is a sliver well silenced by goodness while in others it can be larger.  Occasionally while watching the news I see examples of the the evil sliver growing to dominate a person's actions.  It is terribly sad and disappointing but that doesn't change the truth. 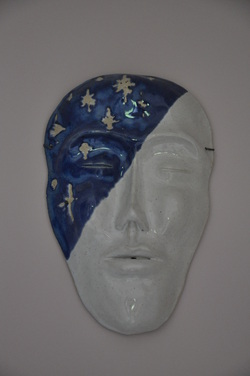 This was inspired by theatrical faces.  The beauty of glazing is that the result cannot be guaranteed.  I planned on the star shapes being more clearly defined and was a little disappointed in the way that the glaze filled in some edges.  On the plus side, I didn't delierately create a small hole in his mouth and was pleasantly surprised to see the finished piece whispering to me. 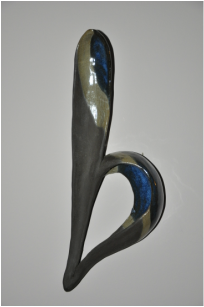 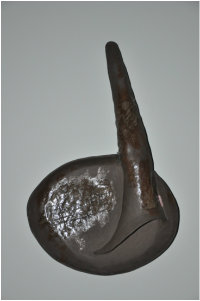 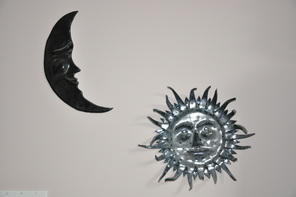