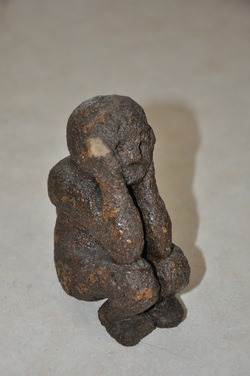 About Ben McCarl, the Artist

Life is an accumulation of memories.  The present is lost in an instant, but the past lives forever.

One day during a summer job, while Ben McCarl hiked though a farmer's field carrying a surveyer's pole in one hand he bent over and picked up a clump of dry mud and a broken twig.  With the surveyor's pole hooked under his arm, he held the clump of mud in one hand and scratched it with the twig.  Off came loosely held chunks of mud.  Off came sharp corners.   A round ball formed near the top.  A line scraped down the middle.  Tiny legs and arms appeared, revealing a sitting man.  A few more details and it was done.   Ben carefully set the little sculpture in his pocket, carried it with him for the remainder fo the work day then took it home and sat it on a bookshelf.  At 21 years old he discovered that he was a sculptor and it felt good, like discovering a long lost friend.  He bought his first block of soapstone along with a file and created a seal.  Throughout the years his sculptures grew and developed, each a reflection his thoughts, attitudes and inspirations.  All of them felt very personal, so personal that he has difficulty parting with them.   A few were given to family members.  One was donated to a charity fund raiser.  Now with hundreds of creations filling every table, shelf and wall in his house it is time to part with some.  Like sending children off into the world, it is difficult but necessary.  Ben's sculptures and other creations are worth hundreds or thousands of dollars but the little mud man is priceless. 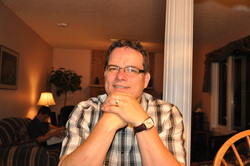