Soapstone is soft, making rough shaping easy but details difficult due to the rock's fragility.
​ 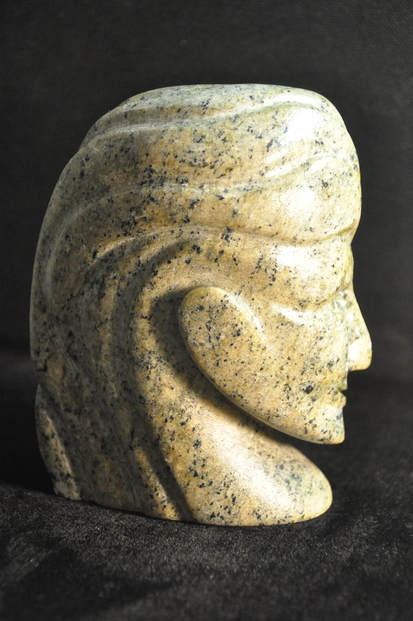 Sedna is worshiped by Inuit hunters who depend on her goodwill to supply food. They must placate and pray to her to release the sea animals from the ocean depths for their hunt.

This sculpture was carved from a type of soapstone with a flecked appearance to mimic the view of Sedna beneath the ripples on the water's surface. Motion through water would naturally pull Sedna's hair back in flowing ribbons, creating beautiful lines on the sculpture.

It was donated to a Rotary fundraiser and generated strong interest. 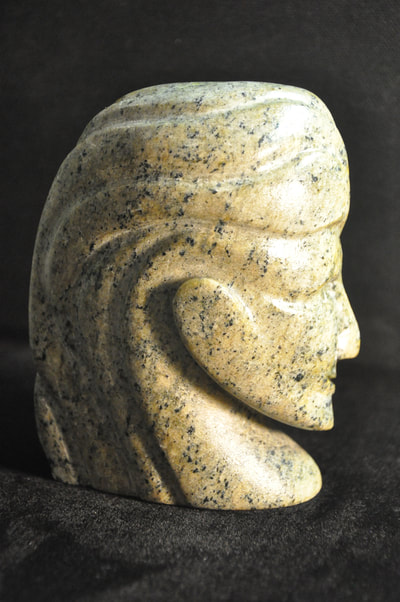 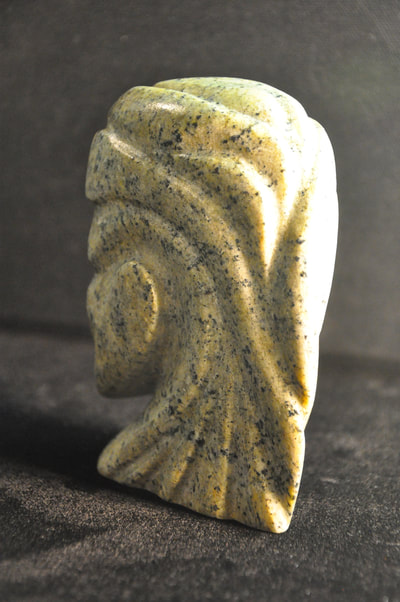 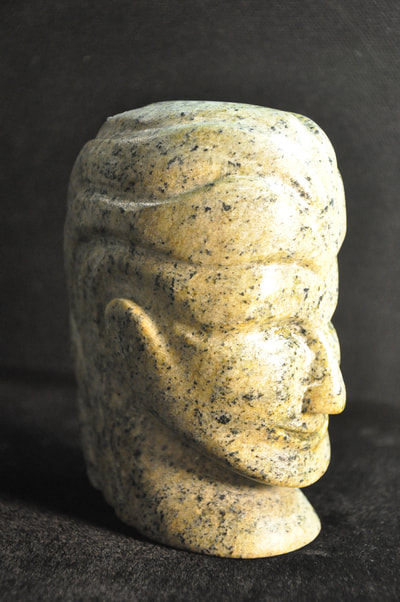 ​Wicked Watcher was created to demonstrating carving techniques while teaching a class at Guelph School of Art and donated to a Guelph Black Heritage Society fundraiser. 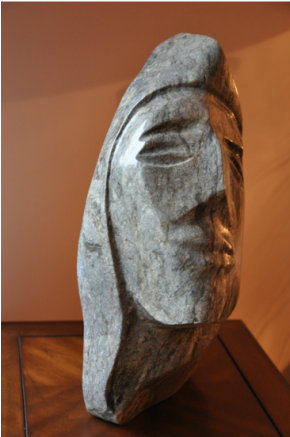 Stone Head was carved from a rock that my father (Dave) and brother (Paul) found on a mountainside in BC.  I can only imagine how difficult it must have been for them to roll and carry this heavy stone through the rugged landscape to the car.  Back at Paul's home they used a grinder to remove any fragile areas that remained after the travelling ordeal then the stone travelled to Guelph, Ontario in the trunk of my father's car.  What a meaningful gift for me.

This sculpture was inspired by the stone heads on Easter Island, standing guard, watching over us.  While carving I discovered a few fragile areas, the nose in particular.  I carved the nose then the tip chipped off.  I carefully reshaped it but it chipped off again.  It's so difficult handling a heavy boulder that's fragile.  On the third attempt, working only with delicate sandpaper strokes the nose was finally finished.  Unfortunately it snapped off again a few minutes later while I was turning the stone.  The remaining stone was insufficient for another reshaping without distorting the overall balance of the face so I carefully picked up the broken chip and set it aside while bringing the remainder of the sculpture to the edge of completion.  The final steps were to glue the chip back onto the nose, gently smooth the seam and apply a protective laquer coating to then entire caving.

Stone Head inspired a nickname during it's creation.  The rock was so heavy that every time I picked it up or spun it into a new orientation for better working angles the words "Holy fuck!" slipped from my lips.  Since I said that more than the true name, it stuck as a nickname. 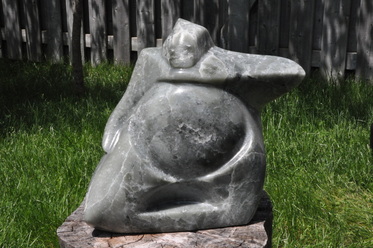 Its an interesting coincidence that this sculpture is the first that I created since retiring.  My life is in transition, not sure where to focus my time when this sculpture emerges from within a rock, showing the way for me to go.  I wish I knew where he was pointing. 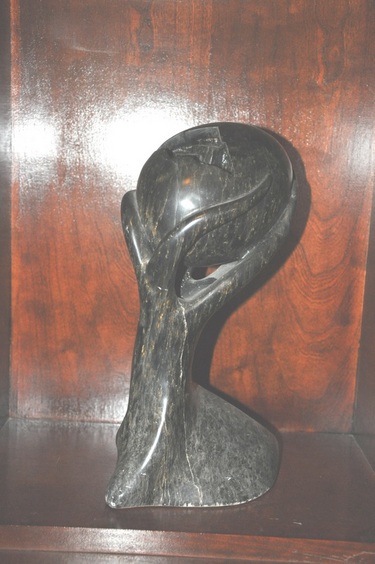 One of my favourite creations created about thirty years ago when artifical hearts for people were first invented.

Phase one of evolution was biologically based, where biological creatures developed through millions of years from single cell organisms to the complex life forms of today.  Humanity initiated a new path by incorporting artificial parts such as hearts and lims to enhance our abilities.  This is the birth of the artificial phase.  In some ways these artificial parts are even better than the original biological ones.  No doubt this trend will continue with the artificial parts evolving into more capable and more complex forms.  Where this new evolutionary path will lead is unpredicable, but we know that it will continue for eons.  Perhaps the end of the road lies at the extreme with no need for any biological parts from phase one.

The tree-like base symbolizes biology, the upper branch mimics a human hand, the egg represents birth, inside the egg are square shapes of technology. 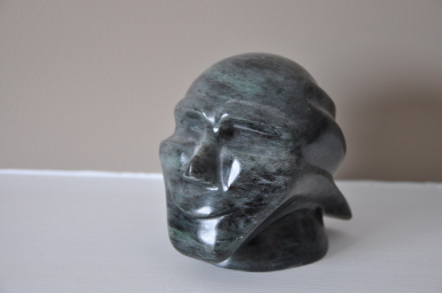 This small head evolved into a happy personna during carving, then somewhere near the end it developed a devilish smirk that reminds me of a feindish character from a Batman show.

The process of sculpting releases the shape hidden within the stone.  I can't control it's personality.  Perhaps it is predetermined within the stone even before my first cut begins. 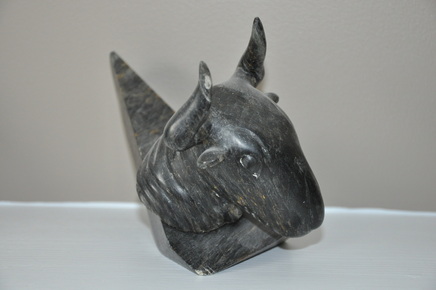 The bull's horns, being long and slender were difficult to carve without breaking.  Once finished, I hollowed out the back slightly, scraped a word behind the head, then glued it to the triangular base.  Many people have asked what the word is but I have told no one.  Perhaps some day someone will carefully break the head from its base to reveal the secret word behind the bull. 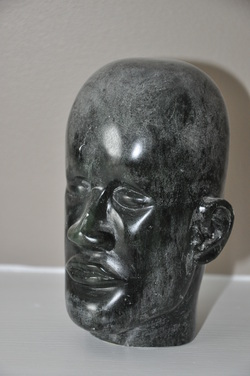 This is the fist head that I ever carved and it surprised me because I didn't know that I knew how to carve a face.  Hmmm, I wonder what other hidden skills I have.  At times I needed a model for reference so found myself looking in the mirror.  No, I'm not African decent (hint McCarl) but my features sufficed.  In particular, I had never paid much attention to ears before which left me directionless while carving.  Fortunately the mirror was there.  Occassionally I also touched my own ears while carving to learn details.  Touching the sculptures ears then touching my own for comparison left white stone powder smears on the sides of my head.  I must look quite silly while carving but sculpting isn't performance art. 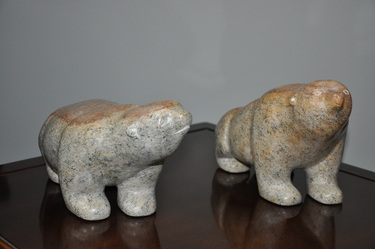 Unable to part with any sculptures, I decided to cut a stone in half and carve near identical bears from each half then sell one of the bears.  It turns out that the bears are similar but far from identical.  One is muscular, inspiring the name Jack (for jacked) while the other is playful, inspiring the name Rolly.  I can't sell either one.  That would be like splitting up a family so they are destined to stay as a set forever. 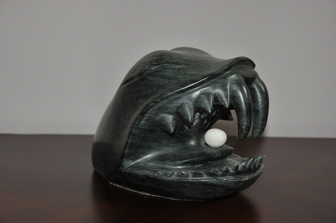 The Jaws of Common Belief

Inspiration of this piece... There are times when logic leads us to decisions that are different than common beliefs and trying to convince others that they are wrong unleashes a wrath of anger fixed on killing the truth even if it means destroying the messenger too.  Battling these believers inspired the sculpture and following quote: 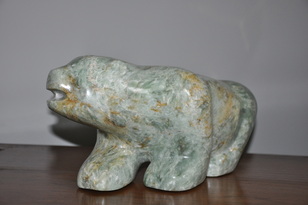 I fell in love with a beautiful, jade coloured soapstone rock. Inside I saw a bear walking and proceeded to carve away the unwanted stone. All went well except for the trailing hind leg. The stone was extremely fragile, especially near the back and when my file scraped over it to remove a little stone, large chips fell off, shifting the back of the leg ahead further than intended. I tried to reshaped the chipping area to look more like a leg, being more gentle with the file this time but more large chips fell off. Again and again I tried, being more gentle each time while using less aggressive files but extra chips continued to fall distorting the leg's look. Soon it was at the point where any further chipping would distort the sculpture's balance and ruin the leg's proportion. I put the file down.

Swaddling the sculpture in one arm I gently caressed the hind leg with sandpaper, ever so slowly adjusting it into the desire shape. Then I worked with finer sandpaper and repeated with even finer paper until the stone was smooth. With utmost care I finished the sculpture and placed it on top of our piano for display. Every time I have to move it I am terrified by the possibility of the soft leg breaking away. I love this sculpture but it frightens me.